Weddings : Weddings with a difference

Most weddings involve a lot of planning and careful thought. However, military weddings require extra research. The style of the wedding will vary depending on the state the marriage takes place in, and the branch of the military concerned. A military wedding is the result of at least one member of the couple being in active service (or at a military academy) and there will be rules of etiquette and established traditions that will need to be adhered to. In short, military weddings are formal affairs: The formality of the invitations is a case in point; each invitation should be addressed correctly, with the title of officers (captain and above) written before their name. The names of lower ranked guests should appear before their rank in the invitation. 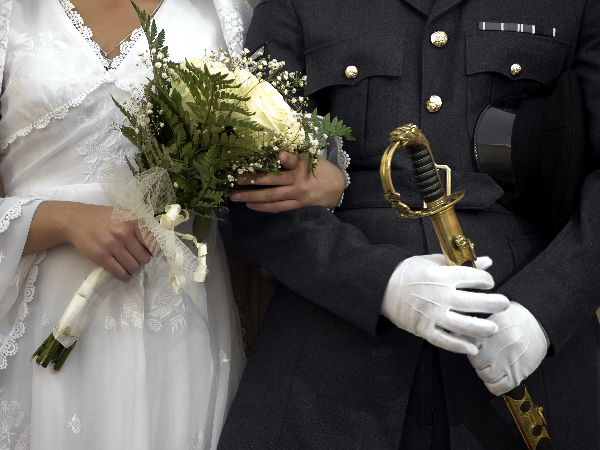 If the bride is enlisted, and on active duty, she will have the choice to wear a traditional white gown or her dress uniform. The groom will don his dress uniform but no boutonnière (floral decoration) of any type is allowed. If the bride wears a white gown her bridesmaids may wear dresses that reflect the colour of the groom’s uniform (although no one will disapprove of any beautiful gowns). Any other military personel present, and in active service, should wear formal dress uniform and anyone involved in carrying a sabre, for the sabre arch exit (see below), must wear white gloves (the groom and his best man are exempt from wearing white gloves because of the giving and receiving of rings). Non-military guests should dress formally and respectfully – they will need to follow the guidelines given by the soon to be married couple. The American flag will be on display at the wedding.

The base chaplain is ordinarily the first port of call for a couple wanting to get married and the ceremony itself can be performed at the military chapel on the base, or at the military academy. Military chaplains do not charge to perform the wedding, although it is normal to give a donation to the chapel. There may be a requirement to attend a premarital advice session with the chaplain but this isn’t always the case. Seating can be a tricky issue at any wedding, but at a military wedding it does also involve some added complexity. As a rule, officers are seated directly behind the family at the wedding in order of rank, and at the after party officers will be seated near the top table. Officers may be introduced at the after party, again this should be done in order of seniority. The ceremony itself will follow the normal legal procedures for any wedding in the US, but after the wedding, if either of the newlyweds is a commissioned officer, it is traditional for the couple to exit underneath an archway of sabers: the Arch of Sabers. The sabers will be held by other military personel and the act represents a pledge of loyalty to the couple from the military family. If a commissioned officer is not present an alternative to the Arch of Sabers known as the Arch of Rifles will be used. Of course, a sabre will also be used to cut the wedding cake!