What happens at a Jewish wedding?

Jewish wedding traditions come in many different forms, but generally share the same basic structure. This article will help you know what to expect!

What should I wear?

As with any wedding the bride and groom will no doubt give some direction about how to dress. Within the Jewish tradition there can be religious sensibilities about wedding attire so it’s worth checking out any preferences the couple might have. At a Jewish wedding men normally wear a small hat called kippah or yarmulke. Don’t worry if you haven’t got one of these, you’ll probably find they will be provided at the ceremony when you arrive (but it might be worth checking beforehand). The reasons for wearing a kippah are debated, but at the very least it is a sign of respect towards the couple and their families. Depending on how traditional the wedding ceremony is, women may need to wear dresses that cover the shoulders and drop beneath the knee. If your dress does reveal your shoulders, a simple solution is to wear a wrap-around for the ceremony (these are also sometimes provided).

A Jewish wedding will normally begin with the kabbalat panim – which literally means ‘the reception of the faces’ (panim means face or faces in Hebrew and it really signifies the whole person). During this time, the bride and groom meet many of their guests (not everyone is invited to the kabbalat panim). The couple are treated as royalty for the day and during the bride’s ‘reception’ she sits on a throne like chair and is normally attended by her female guests. This moment of celebration is called the hachnasat kallah and traditionally was a moment of providing for any of the bride’s needs - it is important in the Jewish tradition that brides are provided for and enabled to have a wedding to remember! And so, it is a time of giving gifts and celebratory dancing. For the groom, his male guests gather around him to celebrate him with drinks and toasts to his good health. There is much laughter and fun and it is traditional to interrupt the groom as he attempts to read a passage from the Torah (the holy book of Judaism). 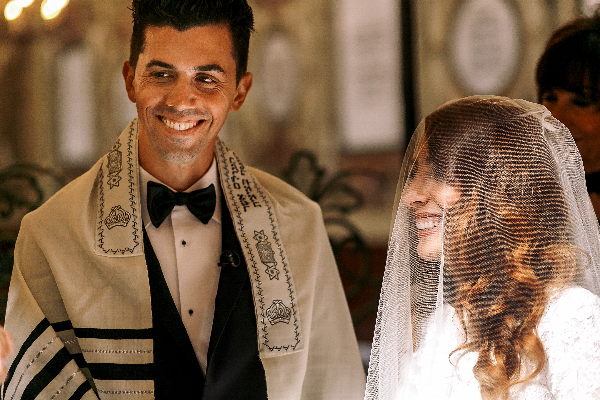 During the ceremony itself

Quite a lot happens during a traditional wedding ceremony. Here are some of the things you are most likely to see:

Once the bride has arrived and the ketubah is being signed, the groom approaches the bride and places the bride’s veil over her face. Normally the couple haven’t seen each other for a week, so this is a beautiful, emotional moment. The tradition goes back to the story of Jacob who was tricked by Laban into marrying the wrong woman – this way the groom knows who is behind the veil! The veiling is called the bedeken.

After the bedeken the couple walk to the chuppah. The chuppah is a canopy under which the couple exchange vows. Normally the parents of the bride and groom stand under the chuppah also! The ketubah will be read out at this point. In some traditions the bride will walk around the groom seven times, there will also be prayers and blessings. In particular, the rabbi will give blessings over two glasses of wine and the couple will drink from the cup afterwards. The marriage is finalised through the giving of a ring to the bride. It is always a plain band and after the exchange has taken place the marriage is solemnised with the words ‘by this ring you are consecrated to me according to the law of Moses and Israel’.

The breaking of the glass underfoot by the couple is one of the final moments of the ceremony. The symbolism of the act is much debated, but it is traditionally meant to symbolise the destruction of the Jewish temple in 70 CE by the Romans. The moment is understood in some traditions as a moment for sober reflection and a point of connection with Jewish history. Normally at this point the congregation shout ‘mazel tov!’ – although some think it is not an appropriate moment for joy. However, if ‘mazel tov!’ is not heard at this point in the ceremony it soon will be, as they are the words that guests love to shout out at the newly weds as the after party begins!